My search for a camper van, Part II

Armed with my 'essentials' list (my van's 'must haves') I scanned the internet and visited local motorhome dealers. The T-reg Swift Mondia I saw in Godalming had moved to Freeborn's Southampton showroom and Berty, a mechanic friend, came with me for a test drive. (Three months, and not sold - is that a worry? No, because it's winter and the market picks up in March.) Berty drove first (as shown)  and one twitch of his eyebrow told me he didn't like it much. It had a grumbly second gear. I had a drive and didn't like second gear either. Happily for the T-reg Swift Mondial, Freeborn put right whatever was wrong and it has now gone to a new home in Spain. 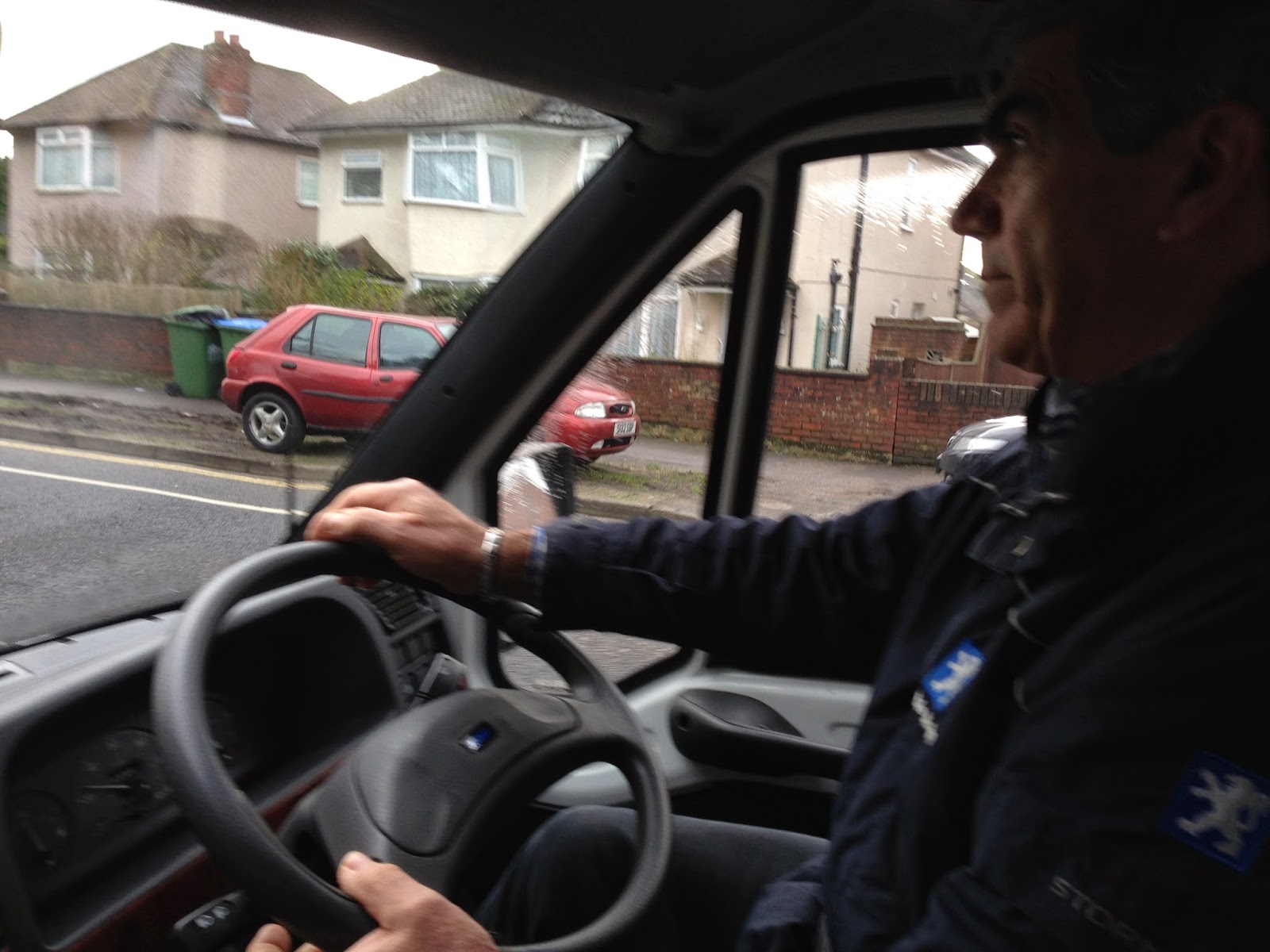 After Christmas I hounded a poor man called Ginger who restores old VW camper vans in Waterlooville. They are so much easier on the eye than most other small vans. I drove to his workshop and peered through the railings (there was a lovely duck-egg blue one I particularly liked) but Ginger had a bad go of flu and didn't open up for days... And when he did (the duck egg blue one, beautiful as it was, needed a lot of work) I realised that the old VWs did not tick any of my essentials boxes. They are a purist's van and obviously I am not one.
Berty and I saw many vans – Fiat Ducatos, Peugeot Boxers, Fords, Citroens – and he gave me ideas for what to look at: the sills underneath (a no-no if at all rusty as that's an MOT fail); go through the gears and feel the clutch, even without the engine on; is there any outstanding finance?; look under the bonnet and it should be clean and tidy, no rust or corrosion round the battery; look for rust generally; is the cam belt in date? Most were at least 17 years old and most just weren't quite right.
My daughter Hebe and I went to Cheltenham to meet Robin, a gardener, and see his Talbot Symphony, 20 years old, and only £7,500. This put a completely different complexion on the whole situation. If it would get me round the UK and was in good condition the depreciation at that end of the price scale was minimal. It's the more expensive ones that depreciate because the market's so much smaller. The Talbot was immaculate, good as new, and had been so lovingly cared for. We loved it too, though I  must admit I was a bit worried about its age. I said if Robin would do a habitation check (like a survey of the living quarters) and change the cam belt (no supporting paperwork was available) I would take it. And that was my mistake. Dealers do habitation checks, not gardeners, and I could've had the cam belt changed myself. At that price I should have just taken it. By the time I had got home, ready to transfer a deposit to Robin, he had sold it to a couple from Stafford who arrived just after I left, no dithering, with the readies. I can't blame him.
Next stop Somerset to see an Autosleeper Symbol. I think this may be the one.

Posted by Geraldine Keith at 13:21