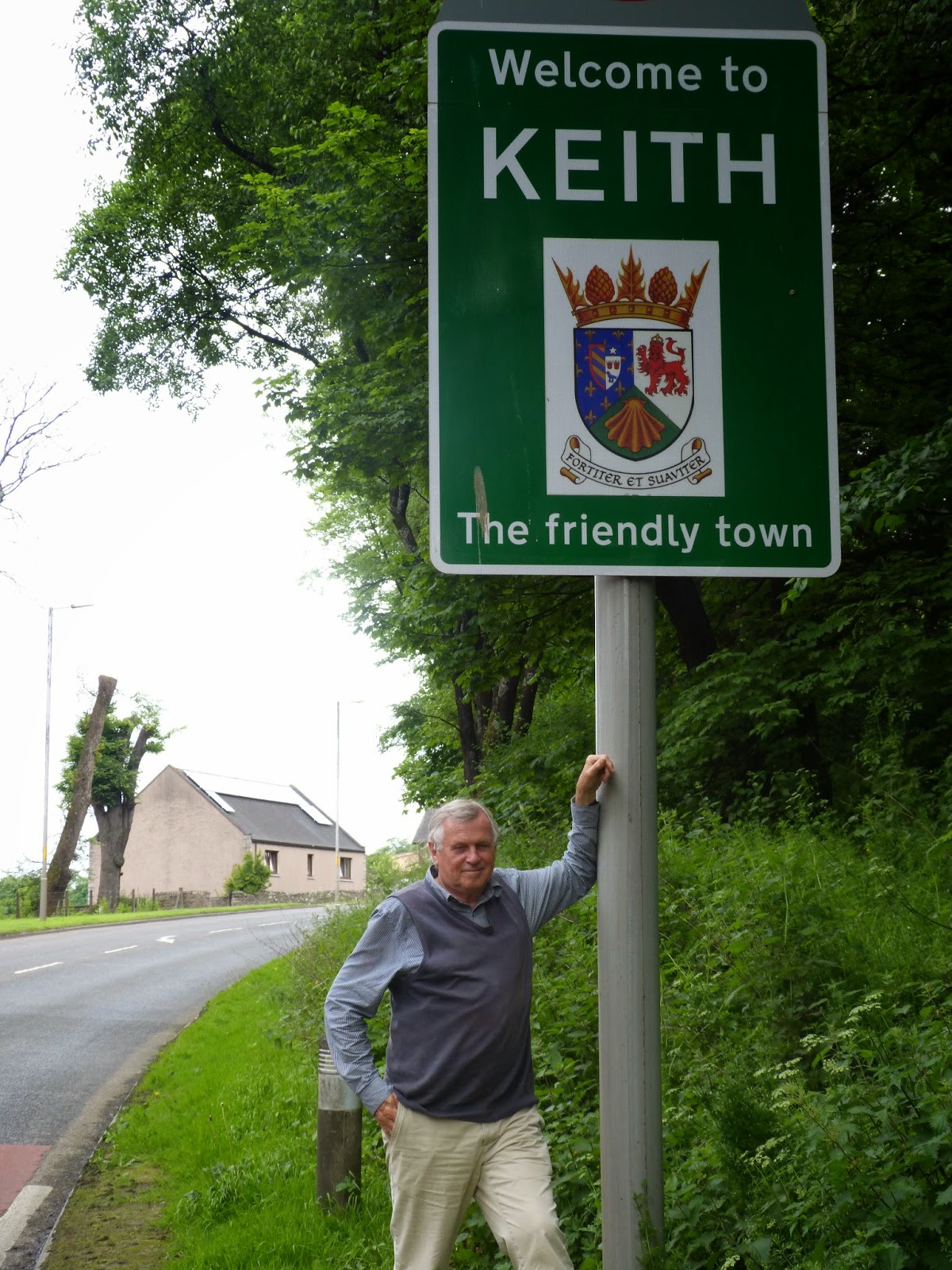 We were glad to visit Keith, which is 20 miles south-east of Elgin, from the family history point of view. Did Nick's family get their name from there? Or did the town take its name from the marauding Keiths who were said to have come over from Germany to fight with the Scots against the English?We'll never know. There certainly wasn't a lot happening when we went there.
The buildings are mostly grey and stark and there is a handsome square in the middle, by St Thomas's church which I thought was a mosque. The hotel we tried didn't serve tea in the afternoon but there was a special World Cup offer of seven shots for the price of five!
This is single malt country, being close to the rivers Spey, Isla and others which run with perfect water for whisky. We had a tour around the Glen Grant distillery and learnt all about The Major who developed the distillery in the 19th century and planted the garden. Today Grants distillery is thriving, though no family members are involved, and the distillery is owned by the Italian company which has Campari in its portfolio.
On we went north, to Buckie on the coast, and then drove east through farmland growing arable crops, and caramel coloured cattle grazing on the grassy headlands. The sea was the loveliest blue, calm and peaceful, sometimes a cargo ship barely moving on the horizon. Banff has a busy harbour with fishing and cargo and we were heading for Macduff, which sits opposite Banff, like a couple of book-ends, either side of Banff Bay. We stayed at Macduff for the night and the next day two children from a nearby static caravan came to talk to us. They said their family come out to their caravan from Aberdeen every weekend. The Aberdeen accent is very strong and I think they found listening to us as intriguing as we did hearing them! Their route back to Aberdeen would be much quicker than ours: we stuck to the coast round pretty bays and small villages towards Fraserburgh.
Kinnaird Head lighthouse at Fraserburgh sits on a 90 degree promontory which forms the shoulder of north Scotland and was the first lighthouse built by the Commissioners of the North Lighthouses in the mid 18thC. Robert Stevenson, grandfather of Robert Louis Stevenson, built it on top of a 16th C castle with an impressive external stairway. You'd see a lot from the top, though its role now is as a museum, and there is a modern, unmanned lighthouse beside it.
I had imagined Aberdeen to be drear and grey, but it's a smart and buzzy place with handsome buildings and smart new developments along the river Dee. It's as famous now for being the North Sea Oil city as it is for its buildings of sparkling granite. We found a parking space by a statue of Rabbie Burns and put on a brew before we headed south.
Dundee was known for three Js: Jute, Jam and Jerusalem. The jute industry in the 19th century was a progression from the linen business, with the water on hand to work the mills, and brought good fortune to the city. We saw the Jute Museum at the Verdant Works. The women workers outnumbered the men by three to one and earned Dundee the nickname 'the she-town'. The women were hard-working and tough and had a reputation for being drunken and bawdy after hours, while their men stayed home to mind the children. With much of the jute industry moving to India (where the jute comes from) and the increase in man-made fabrics Dundee's fortunes slumped badly. The jam refers more to the city's famous marmalade, and I daresay fruit-farming nearby, and the journalism is D C Thomson & Co, publishers who produce the Sunday Post and other newspapers, and many comics such as Dandy and Beano.

Posted by Geraldine Keith at 05:37