I stayed at a campsite close to Botallack, west of Pendeen, and walked in the morning to the Botallack Mines - or the Crown Mines as they are sometimes called. These are the most iconic and much photographed Cornish tin mines because they are beautifully poised on the side of the cliff.

It was a bright, sunny day and I walked through small fields, all irregular sizes and uneven ground, with coarse thistley grass, and with hefty stone walls wide enough to run along, their sides thick with grass and brambles. The land feels lost in time, remote and poor, even though the odd incomers have done up a few nice old farmhouses.
I walked on about a mile to the east to the Levant Mine, passing the hollowed out brick carcasses of other ruined mines with their tall, round chimneys.
The Levant Mine, opened in 1820, first mined copper, and then tin. It closed in 1930 and is now owned by the National Trust.
The entry to the mine, when it first opened, was via a cleft in the side of the cliff. The men had to climb down steep, slippery stone steps to get to the face of the mine,1500ft below. It took them an hour and a half to get down there before they could start work, and they'd probably walked 4m from St Just to get there. As the mine developed the face went down to 1800ft, and two miles out to sea. I can't imagine how hard it must have been, hacking into the rock; it's very hot that far under the sea, and the air was very thin. At the end of their shift they had to walk back up those steps, and home again. It isn't surprising that their working lives on the face were short: maybe from age 14 to 30 - but it probably didn't feel so short to them.
After some years the mine owners decided that the walk down the steps wasted too many man hours. Cages pulled up and down the very narrow shaft by steam engines could only carry four men and they were slow. So in the late 1800s the mine owners installed an engine which carried men, two at a time, on narrow platforms. Ledges were set into the side of the shaft at 12ft intervals, and as the engine lifted the men they would step off one platform and on to a ledge; then on to the next platform as it came up. Is that clear?! It meant that when a shift changed men were coming out of the top of the shaft every seven seconds.
Disaster struck on 20 October 1919. Men coming out of the top of the shaft noticed that no one was getting out behind them, so they ran back to see what had happened. The engine had collapsed and fallen half way down the shaft. More than 30 men died and many more were injured. It was the worst Cornish mining disaster in history. 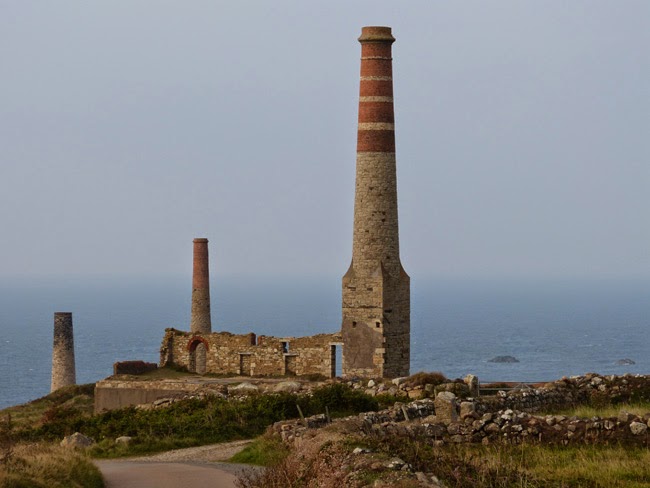 I felt so moved by the whole area – the beauty of it, and the tough life of the people who lived there. I think it was seeing the old mines, once such powerful, busy places employing hundreds of men, that made it so evocative.

Posted by Geraldine Keith at 01:20