This blog is posted from Jaipur, almost a week after I left Gujerat....I  have had trouble getting on line.
The day I went to all the villages was long and tiring – poor Hari the driver looked exhausted when we eventually got to Gondal. I think he’d driven about 320 miles which on these roads is even more arduous than sitting on the M6.
Rajkot, just before Gondal has lots of factories- engineering and electronic - and people flock there for work. At 8.30 pm it was teeming with people buzzing like ants on 2, 3 or 4 wheels, or on foot. When we got to the edge of Gondal we stopped for a few minutes at a railway crossing – great waving, and hoots of laughter at the sight of me from the 15 people in an open autorickshaw alongside us. Then a thump on the window on the other side. Most people tap and look hungry and it breaks your heart, but this was a thump, and a young strong-looking, black-toothed woman in a blue sari asked for money. She is the only person who has ever looked aggressive.. Later I asked Hari was that a man or a woman? and he said ‘Not man, not woman, there are lots of them.’ Hari and I could make ourselves understood well enough, but I didn’t feel we could tackle trans-gender issues, so I left it there.
Hotels in Gujerat are either ‘Heritage’ which means they are owned,  or have been owned by a Royal or a Rajput and have a bit of history about them (and sometimes rather dodgy plumbing) or they are ‘Business’ which means they are characterless. In rural areas there are ‘Camps’ which means they are little cottages, often round, and there’s  a central office/restaurant. The Orchard Palace at Gondal came under the first category – huge airy rooms, nursery furniture and clanky wardrobes, and perfectly comfortable. The Maharaja lived nearby – the hotel was built for the guests of one of his forebears – and he has an amazing collection of vintage cars. I was shown each one – (Not by him, I missed that one!)
Salt is big business in Gujerat and I went to Little Rann where much of it comes from. Little Rann is nearly 5000sq km of flatland which is an incredible wildlife sanctuary. Importantly it’s home to the Wild Asiatic Ass – there are lots of them but this is the only place they exist.  I was taken there by the manager of the place I stayed in, Rann Riders. Much of the flatland is flooded with water from a borewell and after a couple of months, salt has formed. People go and live out there, working the salt flats, scraping and raking and gathering the salt. They had just left when we went out because the monsoon is on its way and salt production will stop until September.
I had lunch with the Maharaja of Dronghadera, known as Bapa,  about 2 hrs from  Ahmadebad (main city of Gujerat). He lives in a beautiful palace, slightly crumbling. We talked in a spare bedroom because the a/c was most efficient there – part of the zenada where his father’s, or was it has grandfather’s?, wives lived. Bapa read chemistry at Oxford and had great tales to tell. His brother came in briefly to say hello - he is a Professor of Anthropology at a US university and had a group of American students staying in the Palace.  Bapa’s daughter and son in law and their two children live there too and we had a wonderful lunch talking about India and maths and about eating, or not eating, animals.
Driving into Ahmadebad was a bit of a comedown, but arriving through the suburbs of an expanding frenetic city at the end of a long day is never going to be good. The litter is indescribable - plastic bags and cartons mainly - piled up in filthy heaps. Plastic is everywhere in India, filthy old carrier bags all along the roadside, hanging out of trees, it was even caught in the few bushes dotted over Little Rann. 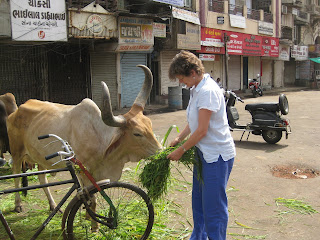 The next day I had a taxi ride/tour to see the town. I started by buying breakfast for a cow. Lots of people do this - 10rps, and it gets the day off to a good start. I visited an amazing 15century mosque, and The Calico and Textile Museum which is absolutely fascinating- said to be the best textile museum in the world. But we weren’t allowed to take water in and the tour lasted nearly 2 hours with no a/c.  I was fearful of swooning into the needlework. It was 43c when we got outside.
I left early this morning for the airport, bound for Jaipur. Some ponies and goats were running frantically the wrong way round a roundabout as my taxi sped through town, pedal to the mettle, leaning on the horn. Hey ho. I arrived safely in Jaipur at lunchtime.
Posted by Geraldine Keith at 07:54