I left Mumbai on Wednesday and have had 3 days in Gujerat. Not enough time - I love it - but I will just have to come back. I have had an a/c car and driver (Hari Singh) which seemed like a bit of an extravagance when I booked it, but I  couldn't have covered the distance any other way, and it has been 43c on occasions, so a/c vital. 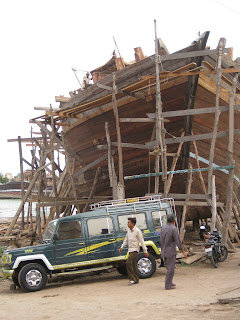 I flew in to Bhuj, in the Kutch area in the west - it's flat and dry, known as the wild west - and met Hari and drove down to Mandvi on the coast.There is the most incredible shipbuilding industry in Mandvi - beautiful wooden ships - big boats, one was 153m long - which are mainly sold to the Middle East. Sadly my camera battery ran out as I was walking up the ladder so I can't show you the inside. The beams across are vast timbers -25m? long - which are bought in from Malaysia, otherwise they are made from Indian trees. Then on to the beach where I stayed in a tented camp - a big tent with a/c in  a beautiful resort with miles of beach, see pic.
I can't remember if I have said it enough, but I am here totally out of season, so all the places I have been to are devoid of foreign tourists (Indians have been on holiday, but not so much now) and maintenance work is underway before the monsoon breaks. Then the tourists come in August/September through till March, post rains, with new roofs etc. The beach camp was lovely - comfortable, charming. Beautiful birds flying about and some small antelope scuttling about in the bushes. The only other guest was a character from Evelyn Waugh, a German who had been there for 2 months, working on a power plant nearby, with another 3 to go. 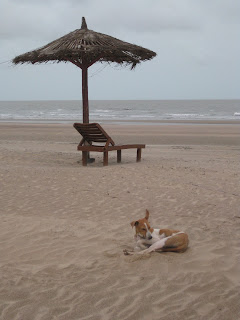 The Royal Palace at Mandvi, is home to the Maharaja of Kutch. A really pretty Palace, built from Jodhpur sandstone in the late 19th century, surrounded by pretty gardens and then scrub and palms and the sea . There isn't much to see inside, if there were riches they have been sold off. Just half a teaset in the dining room cabinet, but it had great charm - faded family photographs and hunting trophies - a stuffed tiger in a glass case -  and shiny colour photographs of the crew of a famous Bollywood film which was made at the Palace. There were signs warning of fines (50rps) for sounding your horn outside, 100rps for spitting and on the way up the steps to the roof there was a sign on the door saying #000 (first figure scrubbed out) for 'opening this door'. It was tempting, for a peep at the Maharaja in his dressing gown, but it could've been expensive. He lives most of the time in Mumbai but was actually 'at home' when we went - his jeep in the courtyard with the royal crest for Kutch, Courage and Confidence.
Then we set off on a tour of all the villages (Kutch is famous for its craftsmen) and saw people doing the most beautiful embroidery, painting, block printing, making bells.. I saw the lot and felt quite panic stricken as everyone pulled out all the cloths and bangles and bells and carvings... but they don't mind - they are such lovely smiley people. The women are so beautiful and colourful and industrious. (I might blog about the craft, it deserves more, but I am tired with scramble-brain after seeing so much.
There is a great feeling of activity and - almost - prosperity. (Gujeratees have a reputation for being industrious and entrepreneural.) Agriculture is big and tractors looked quite new and shiny ploughing up and down the fields - more than can be said for the traffic on the roads..! And they have sophisticated irrigation - a vast canal is being built across the state and there are bore holes which water is pumped from. Considering how mind-blowingly hot it is, trees etc are very green. They grow cotton, corn, millet, bananas, mangos, castor oil, vegetables - and there are even more cowes than before.. and buffalo. Lots of lorries with milk written on the side - they must be refrigerated or the milk would be yoghurt after a couple of miles, but the tankers don't look too hi-tech.
Roads are good in parts too - terrible in others. Vast stretches of new tarmac (no white lines) and a central reservation sometimes but you can drive either side of that..  Often the new road meets the old one with such a step that it throws your insides out and then you are likely to meet a herd of cows/buffalo/sheep walking back from grazing in the fields, and just setting out across the highway (stepping over the central reservation) with a man waving a stick.
(Nicki sent word from Mumbai - it poured with rain the day after I left.)
It can be incredibly difficult to understand what people say, and to be understood. We are all speaking english, but not quite the same english. Hari's english was moderate, and he obviously thought the same of mine. It's annoying because you can miss a lot..
More of Gujerat to follow.