There are thousands of Non-Government Organisations (NGO) in India.  It is one means by which people feel they can make a difference to social issues, healthcare, education, etc.  Faith is an NGO, and the students who helped the children with their computer skills at the technical college are in the process of forming an NGO. So many people are doing their bit to help the poor of India.
I went to a lovely 30th wedding anniversary party of friends of Smriti and Surendra. The couple are doctors – Meeta a pathologist, and Ashok an opthamologist – and most of the guests were doctors too. I met Dilip and Tanuja Chandra there who run a homestay (B&B). He is an architect who is involved with an NGO called Alternative Development Centre, which runs schools for street children. 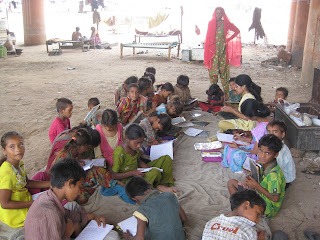 Yesterday I went to see Dilip and Tanuja and he took me to one of the schools. These children are the poorest of the poor. They live in small slums under fly-overs or on patches of undeveloped land. They might be living there for the long run, or they might be immigrant families who have come in from villages to work on building sites. Many of the adults are addicts of some sort and yesterday the mother of one of the children was very drunk (a very jolly drunk!) and stunk of whatever home-made hooch they drink. But they are very keen for their children to learn and the adorable children were working hard with the chalks and slates.
The children range in age, I would guess, from 4 to 14 – the younger ones in particular were very grubby with matted hair and filthy clothes. One girl, in bright a yellow/green top (bottom left of picture) was married – she is 12. Child marriage is illegal, but it still goes on – the kudos of having a daughter married is still a big thing. The children were learning letters and numbers and stood up and recited nursery rhymes etc for us. The idea is that they should at least learn enough to get by, simple writing, counting money, etc  The problem is that their family might move on to a place with no such school, or a job might come up for them and then they won't come any more.
There are two pairs of teachers funded by Alternative Development Centre and both pairs do two 2-hour sessions each day to cover the four schools. They all sit on mats on the ground and there is a big school trunk which the teachers bring with the pencils, paper, chalks and slates. The children get a good lunch when they have completed their two-hour class.
Who knows what will become of those children as they grow up..  but at least this simple school might give them a better chance than their parents’ had, and enough self-esteem to keep them off the hooch.


It rained hard today.. I am told this is just 'pre-monsoon' but it seemed pretty monsoon-like to me. Despite the fact that everything is floating up through the drains, the air is wonderful after rain...
Posted by Geraldine Keith at 10:51