When I was in Delhi, when I first arrived in May, I went to see a shop called the Kashmir Loom Company. I met one of the partners, Samina, who showed me their pashminas and I said that I would like to buy a couple before I returned to England, and if I went to Kashmir could I see where they are made? She said of course I could and I emailed her before I left Jaipur. 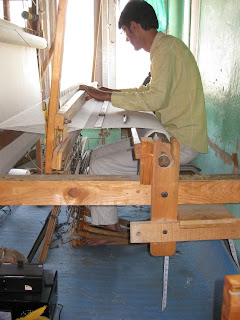 So, yesterday, Hamid, one of three brothers who run the Kashmir Loom Company with Samina, picked me up at the houseboats and we had the most amazing day. We went to see the weavers,  (left top) and the ones who weave with lots of coloured wools in different needles so it looks the same front and back (bottom). The finished article is shown too!
We went to his house where his mother (seen with Hamid)  showed me how to comb and spin the pashmina wool. We also went to see his uncle who makes papier mache - exquisite fine work, and more crewelwork embroidery.
Hamid and his brothers employ many outworkers to work to their designs and it seems that these incredibly talented and creative workers, after many years in the doldrums with the militancy troubles and lack of both exports and tourism, have a really thriving business again. They looms are set up in their homes... everything is done by hand. "They work how they like, not in a factory," Hamid said. "You need a good environment, some cool breezes coming in, good natural light."
"We don't stop buyers coming to see the work, people can go direct to them if they like. The weabers are committed to us for the work they agree to do, but they are free." 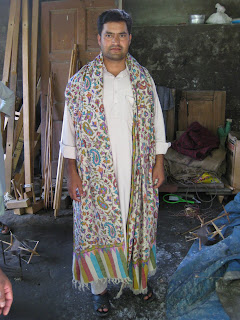 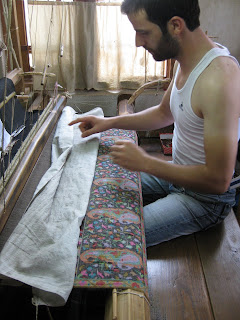 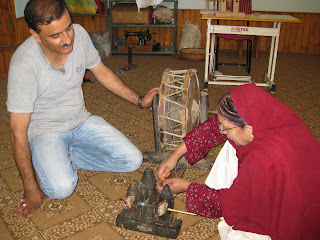 So if you wonder why a real pashmina costs a lot of money, I can tell you why. The raw wool has to be bought in bales then it is combed, and combed again, and washed, washed again, and spun. Then the weaving can take 2 or 3 weeks. If it is embroidered, this is done entirely by hand. Everything is done entirely by hand. Some big shawls, which are entirely covered in embroidery, take 3 years to make. Then they are checked, checked again, washed, washed again. Then checked... then sold.
"Of course we could make shawls for a fraction of the price if we used machines," said Hamid, "but then what would these people do?"
Posted by Geraldine Keith at 22:35

Martha Keith to be! said...

A note to say I have been loving your blog! Your travels sound amazing and are making me long to go to India. Can't wait to hear all about it and see more photos when you're home!