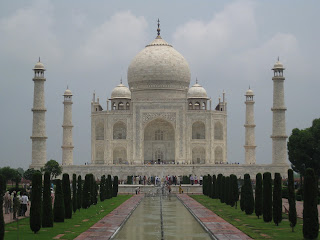 Having said how efficient the trains are in India, the next one I got on – Varanasi to Agra – was six hours late. I had planned this last section of my travels carefully and booked myself on a train to arrive at 5.45am. I would put my case in left luggage at Agra station and go straight to the Taj Mahal and see it bathed in early morning light. Then I would see the Fort, wander about a bit, and get a bus to Delhi. Simples.
Instead I arrived at 11.30 when the sun was high (except it was overcast) and I felt horribly crumpled, tired  and dirty. I paid a taxi for 4 hours to take me on a tour, locked my case in the boot, and Rashid was my excellent guide.
“Madam,” he said to me (better than Aunty) “when you walk through that arch and see the Taj Mahal, for a moment your heart will stop.”  And he was right. It is just the most breathtaking thing you can imagine – milky white marble raised up so the backdrop is just sky. Even on a slightly dull day it takes your breath away. If you have seen it you will know what I mean and if you haven’t, put it on your list.
Then I had lunch and a minor detour to a workshop where they make inlaid marble in just the same way as the marble at the Taj was inlaid 350 years ago... and then to the bus stop. Five hours later, with a/c set to superfrost, I arrived back in Delhi and met Hari my Sikh taxi-driver friend who had put me on the train at Delhi Cantt 10 weeks ago. He wasn’t in the best mood, not just because my bus was an hour late, but because “Madam, my brother is in trouble..” His brother had been stopped by the police for having no license.. which might have been sorted with a bribe, but his insurance was out of date too...   So we stopped under a flyover and Hari went with his license to try to sort it out. I stayed in the car.
Hari insisted that, for the inconvenience, he would buy me a beer. No really, Hari, I don’t need a beer (it was getting on for 10pm) “I have turned off the road for the beer shop now,” he snapped, “do you want two beers?” No, really, please just one, a small one. It was a Kingfisher beer with a red label marked strong.. and it was. So Olly greeted me back at the flat – very tired and grubby, dragging my suitcase and clutching a can of strong lager...  Home in 3 days.
Posted by Geraldine Keith at 22:28

Email ThisBlogThis!Share to TwitterShare to FacebookShare to Pinterest
Labels: India 2011

Hello! How are you? Are you home now? Recovered yet? Think i've just about got over the post travelling blues... It is really strange not to be independent any more though! What did you get up to after we left? I've been catching up on your blog - it looks amazing! Speak soon x

Thanks for sharing this useful post. We also giving the reiki training in India service.
Reiki-Crystals-in-India

Very Informative! This blog is great source of information which is very useful for me. Thank you very much for sharing this! Indian Chemist