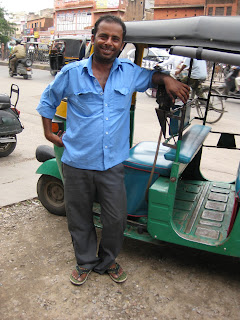 This is Sonu my taxi friend in Jaipur. He is a very smiley fellow and talks good english - non-stop. He likes driving english people best "I like the french/germans/italians etc. But not so much. They don't speak so good english." No Sonu, but... "You. You make me very happy." I am sure I do - I pay him over the odds, and he has taken me to all the places where he gets a rake-off. "No worries, you don't have to buy. I just take you there and they give me little something for my children." Once I thought we were visiting a home for deaf and dumb children which he kept talking about, but it turned out to be another jewellery shop. Grrr (Not so good english after all!)
It irks me most that I should be irritated. After all, a couple of hours in Sonu's taxi only costs 350rps (five pounds). So we carry on and we have a laugh.
On a couple of occasions I have been driven by his cousin - both of them squeezed on to the driver's seat (below)- and I couldn't understand why, except Sonu said his cousin likes to practice his english. But I think it was because Sonu couldn't get his rickshaw that day. Most drivers (70%) he tells me own their rickshaws and the rest rent them. Sonu pays 175 rps (2.50) for a ten-hour shift and then hands it on to someone else, and he pays 300rps a day for diesel. On a good day he would hope to make 1000rps+ - a not so good day 600. So it seems churlish to quibble over the odd 50rps.. 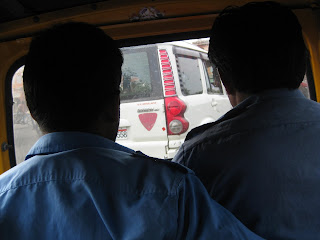 Yesterday I said goodbye to the children and came by train to Delhi. I knew it would be awful saying goodbye, they are such a great lot of children. It was worse than awful. When I left I was in tears and so was Smriti. Sonu put my case in his auto and took a couple of photographs of me with the children and then we set off for the station. There was none of his chirpy chatter, he didn't talk at all. He just said when we got to the station that he thought I ought to come and live in India, and I could go back and visit my family once a year..!
Posted by Geraldine Keith at 00:50

Perhaps you will go back ... or perhaps some of the children will come here to see you, one day? Somehow ... .

So poignant that non-stop English-speaking Sonu didn't say a word on your way to the station. That says more than any words could.