The ferry from Gill's Bay, by John O' Groats, takes a bit over an hour to reach Orkney at St Margaret's Bay, on South Ronaldsay. We saw guillemots, puffins and two dolphins, but Janet, who I was standing with on deck, had seen an Orca whale last time she did this crossing. It was sunny and calm except for a patch of water in the middle of the Pentland Firth (remember Orkney is “where the Atlantic and the North Sea meet”) where the currents are famously hazardous for sailing boats. The sea blew up frothing and choppy, and caused all the car alarms to burst in to song. (Baa kept mum, no alarm.) 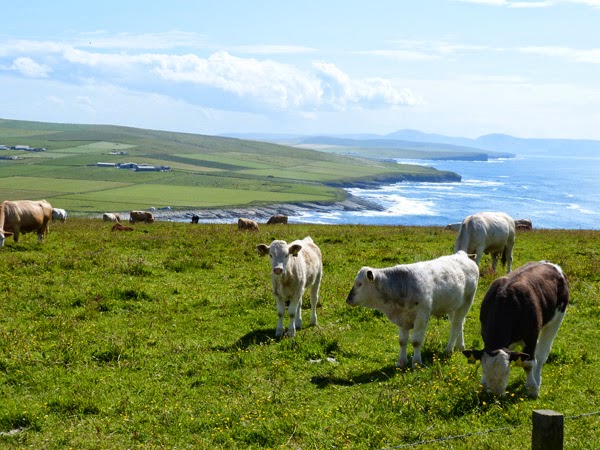 Orkney mainland was bathed in sunshine when I drove off the ferry and headed for Kirkwall. I felt most uncomfortable because I had had to back on to the ferry, and had ricked my neck.  I drove over the Churchill Barriers which bridge the southern islands. In 1939 a British warship, HMS Royal Oak, was torpedoed by a german u-boat in Scapa Flow with 833 lives lost. Churchill had the barriers built to protect the eastern approaches from further loss.
Italian prisoners of war were brought in from North Africa to help construct the Barriers and they built a charming chapel out of a couple of nissen huts. It is the only remaining bit of the camp, and has been recently restored. An artist POW copied Barbarino's Madonna and Child behind the altar from a card his mother had packed in his bag when he went to war.

I went straight through Kirkwall, which is functional but a bit drab except for its stunning, red sandstone St Magnus Cathedral, built in 12thC.
I was going to see Susan and Len Hunt who I didn't know, but who are friends of a friend who had put us in touch. They live in the West Mainland, and were so hospitable and kind and full of local knowledge: Susan is Orcadian, and they returned to live here when Len retired. I parked in their field and went out each day to different sites – archaeological and coastal – and returned for little eats, and gin and tonic in the evening!
Orkney is peppered with the most amazing archaeological sites – mainly Neolithic – which are fantastically preserved, mainly because most of their 3000 BC houses and furnishings were made of stone. It also has the most wonderful beaches and cliffs, and soft, green rolling farmland. Most farms are beef cattle, some dairy and very little arable. Cows and calves are everywhere, running with their huge, very content looking bull.

Farmers were cutting and turning grass for hay and the cut fields were covered in hundreds of oystercatchers, curlews and gulls. (Oystercatchers and curlews stick together, gulls and crows in the next field.) I love the oystercatchers with their peeping whistle, their red beaks and legs - and they are everywhere on Orkney - on fields, cliffs and on the shore.
Susan took me to see Stromness, the island's second town (though folk there probably wouldn't say so) which is smaller and more arty than Kirkwall. It has an excellent museum with lots of artefacts about their local hero, John Rae, who was a great Arctic explorer and found the North West Passage.  In the 18thC the Hudson's Bay Company in Canada set up an office in Stromness, recognising the qualities of the steadfast and tough men or Orkney.

Posted by Geraldine Keith at 05:23