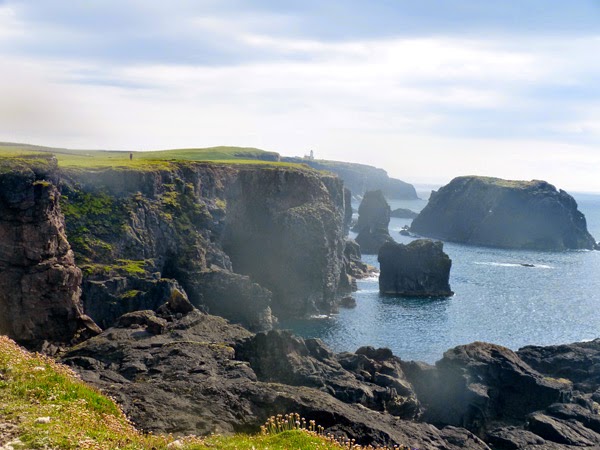 As well as its natural beauty, archaelogical sites and its wildlife – Shetland has great commerial prosperity. Since the 1970s the oil terminal at Sullom Voe has brought great wealth to the islands. Oil is brought by pipeline from the North Sea, and now also from the North Atlantic, and goes by tanker to refineries all over the world. There is a huge new gas terminal being built too and 'accommodation barges' have been brought in to house all the construction workers.
The road to Sullom Voe is like any other on the island, with striking views, and a few stray sheep to negotiate. We thought we might be on the wrong track and suddenly, round a bend, we came upon it, one of the biggest oil refineries in Europe. A vast James Bond-style panorama opened up, ultra modern and totally out of step with those grazing sheep we'd just passed. The nearby airport which is largely there to serve the oil fields is buzzing, with jets, small planes and helicopters. I stopped and gawped at it! 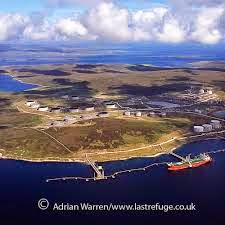 When North Sea Oil first came to their shores the Shetland Islanders negotiated that, rather than allowing lots of companies to open up there, BP should manage the whole business. The strength of the oil there will ensure that the Islands' foreseeable future is safe – I do hope that is the case.
They also have a huge fish farming industry – mainly salmon, mussels too – which I was told, though I find it hard to believe, makes even more money for Shetland than the oil industry.
Shetland certainly is a pretty magical place in the summer – it is just a very, very long way from home. I got a ferry south at 6pm which was much better than the outbound night crossing, and seven hours later I was back on Orkney, in Baa and in bed. Still a very long way from home!

Posted by Geraldine Keith at 11:23