South into England to Carlisle, I turned hard right along the south side of the Solway Firth. There are wonderful views back across to Scotland as I drove west to Burgh (Bruff) by Sands where a monument to King Edward I stands by the side of the Solway. Edward died here in 1307 during his last attempt to conquer the Scots. What a spot! 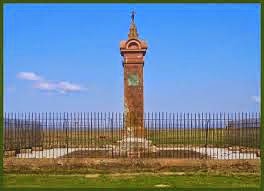 The monument is right out in an open plain, looking north across the water to Criffel, one of the highest hills in southern Scotland, with Skiddaw rising high out of the Cumbrian hills to the south.
Port Carlisle was just a little fishing village until a group of businessmen decided to build a canal linking it to Carlisle in 1823. The place hummed for a while as coal and wheat and the wherewithal for all those biscuits (United Biscuits and Carrs all came from Carlisle) moved along the canal, but it became unviable and the canal was replaced with a railway. I was hoping to see what remains of the canal, but couldn't find anything.
It is very quiet in Port Carlisle now, and next door in Bowness-on-Solway, and I wondered what the people who live there do...? Mostly retired I imagine and it isn't far to go to work in Carlisle, but there was a bees-buzzing, sunny, sleepy,  slowness to that remote north-west corner of England.

Not so sleepy round the corner in Silloth, once a humming Victorian seaside resort, and it's still a popular family holiday destination. The promenade runs along the Solway – with that same wonderful view across to Scotland – and there's the biggest village Green I have ever seen. A recently restored Victorian pagoda stands next to a small amusement arcade and dodgems for toddlers; families were having picnics on the Green, walking their dogs and flying kites. There's not a lot happening in the town – a Spar and a Co-op, charity shops and several funeral parlours – but I found a chemist and bought antihistimine as I have been attacked by mosquitos again.
The whole of this north-west coast is very Roman; and Maryport, 15 miles south of Silloth, was an important Roman port. There was a Roman fort here and many of the Roman remains are in the (very good) town Museum. But the town today has echoes of the successful town it was in the 19thC, when fishing and coal brought prosperity and a very handsome, large harbour with smart merchants' houses on the hill behind. I had been told that the Captain Nelson pub, down by the harbour, was the place to eat “if the grandmother is cooking”. I don't know if she was or not because I didn't want to eat and headed south for Whitehaven.
Posted by Geraldine Keith at 11:52