I visited Skye with my friend Susie Bagot. We met in Fort William, bought provisions, and set off on the 'road to the Isles' alongside Loch Eil. We stopped to see the Catholic church of St Mary and St Finnan which was designed by Edward Welby Pugin and built in 1873. It sits on an elevated piece of land at the head of Loch Shiel and it was here in 1745 that Bonnie Prince Charlie gathered the clans and raised the Jacobite standard before the uprising in 1745. It's all very peaceful now driving round sea lochs and picture perfect highland views - we even saw The Jacobite steam train go by. We stopped for tea at Cafe Rhu on the roadside at Arisaig. Good luck to Euan Baillie, the chef/proprietor, who took over in February; he had an interesting menu (smoked mackerel cheesecake, hand-dived scallops and Stornaway black pudding), and the cafe is in a great position.


We were heading for Loch Morar for a little trip down memory lane for Susie who went on family holidays there as a child. We chose a wonderful campsite, beyond Arisaig, quite by chance (there are several close together). Such a nice woman runs the site alongside a small working farm (cows were calving), and a large patch or vegetables. Her shaggy dog patrolled the site and when I walked to the office I saw him sleeping among (but not in)  the baskets of washing. The facilities were perfectly adequate, nothing special (particularly good handwash in the ladies - Scottish Bog Myrtle) but it has great charm and the position is magical.
We walked along the sand at low tide with children playing in rock pools and throwing sticks for dogs with the most beautiful backdrop of the islands of Muck, Eigg and Rhum. It was still light at 11pm and black rocks  stood out on the white sand as the orange sun sank down behind Skye.
The next morning we drove into Mallaig and bought a ticket for the ferry to Skye. Susie bought smoked salmon from Andy Race's Fishery. A review on their flyer said they sold “the best smoked salmon in the world”, and I have to agree – it was sublime. Skye is a mix of mountains and moorland, small farms and great beaches. There are plantations in the south-west and the middle of the island is mountainous. We tried and failed to reach some inaccessible places on the west coast and then drove round Loch Harport as the sun was going down. 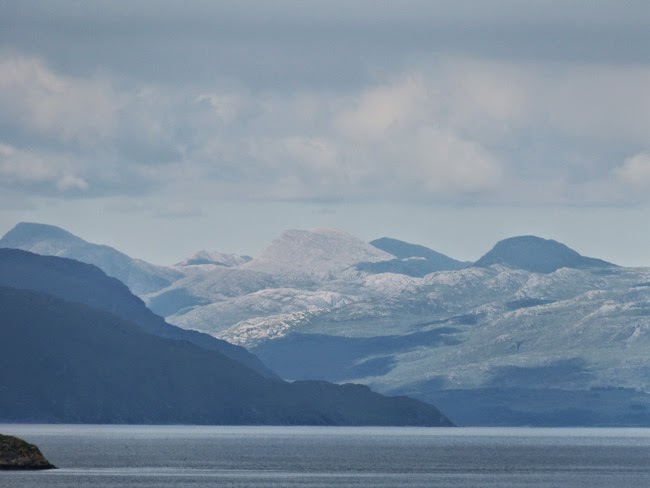 We stopped for the night on the water's edge next to a fish farm... and cooked some fish we'd bought in the supermarket in Fort William! Two small trawlers came in at about 10.30 and unloaded their catch. By 5am (we didn't sleep very well) they had gone out again
The manager of the fish farm appeared in the morning and told us that this one was of only average size - they have 700,000 smelt growing in the enclosures in the bay. We talked about the forthcoming referendum. He was rather non-committal but said he thought it might improve the business. Though, when it came to it, he would probably vote 'No'. .. It may seem strange that I have barely mentioned the referendum, but people seem reluctant to talk about it, and apprehensive as it draws nearer. People who live in outlying places seem more likely to vote for separation, but more people seem to want to stay in the Union. Who knows?
We set off round the east side of the huge Cuillin Hills – their peaks lost in the clouds – and saw flat-topped hills which looked liked their tips had been clipped clean off.
Beyond Dunvegan Castle, on the edge of Loch Dunvegan, we stopped to walk on the Coral Beaches. It was a lovely walk but I did feel a bit disappointed – I thought coral beaches would be coral coloured. They are not.

Posted by Geraldine Keith at 14:28