Yesterday I drove around Mumbai - (I didn't drive, you understand, I had a taxi) - and went to look at The Taj Lands End which is the new one north of the main city, at Bandra. It is incredibly smart - I went to look at the shop because the receptionists at the main Taj Palace Hotel in South Mumbai have the most incredibly beautiful saris specially woven in Benares. Someone within the Taj group realised that the old Benares weavers were fading out and need investment, so started this incentive to get them going again. One of the projects is the new sari, and I want one! I was told that The Taj Lands End had them in their shop. They didn't! They did once, but no more. So then I decided to go and look at the area north of Bandra and in particular a trendy hotel favoured by the Bollywood crowd. I wasn't star spotting, but wanted to see the place you understand. 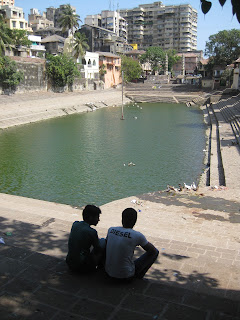 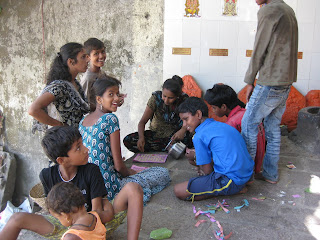 It takes ages to drive anywhere because the roads are so congested (luckily taxis very cheap) and I felt so shocked when I left the slick security and luxury of The Taj to drive, within minutes, through the worst and smelliest slum area - it was just around the corner. Somehow you never quite get used to the devastating contrast of the haves and the have nots...  it quite takes your breath away. People living in corrugated tin boxes, a terrible smell - fish added to the usual slum smell because this was a fishing place - and grubby children and scrawny dogs in narrow alleys. People sleeping, flies buzzing and just the general smell of utter poverty. Then we are in Bandra, one of the richest suburbs, and on the way to Bollywood.
The hotel was ok - slick and Swedish - nice. North Mumbai has such a totally different feel to the tourist/old Raj feel of South Mumbai.There was a young lad in the hotel from Yorkshire - he had combat cut-offs and a flat tweed hat - and was obviously part of a film crew. I wanted to ask him what he was doing but he was talking with someone and then he was gone.
In the afternoon I thought, for something completely different, I would try to find the Banganga Tank - the last surviving sacred bathing tank apparently, dating back hundreds, perhaps thousands of years. To get there we drove through Malabar Hill, the smartest suburb full apartment blocks with shiny marble name plates and private little palaces, government homes, all with security guards with guns and great big gates. Sonia Ghandi I believe lives here somewhere.
It was clever of the taxi driver to find the sacred Banganga Tank, the road leads off Malawar Hill and down a straight narrow lane, impassable for two cars, with people living in tiny little houses on the road and up little alleyways. Their clothes hang on string lines against the wall, not because it's wash day, but because they are aired there and there is no room to hang clothes anywhere else.
We found the tank (see above) and saw people praying on the steps and children and ducks swimming in the thick green water. Buildings have grown up all around the tank. Some children (see pic) were playing 'housie' - bingo - in the shade. I sat with them for a few minutes and then got back in the taxi and we wound our way back to the richness of Malabar Hill.
This is my last day in Mumbai, I am heading for the domestic airport, to fly to dry and barren Bhuj in Gujerat. I might not find internet connection for a day or two.
Posted by Geraldine Keith at 23:10

Hello! My email account has been hacked and now blocked by hotmail, so we don't have any record of your email address any more. How are your travels going? We will be in Jaipur around the 7th still if everything goes according to plan. See you there! Rosie and Billy x