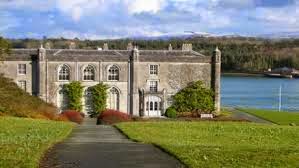 Anne and I crossed over to Anglesey and went to see Plas Newydd, formerly a home of the Earls of Anglesey, and now run by the National Trust. It looks south across the Menai Straits with stunning views of Snowdonia beyond. The artist Rex Whistler spent a lot of time here and his mural of a romantic Venetian-type scene which runs the length of the dining room is in itself worth a trip to Anglesey. 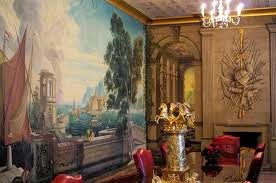 In the grounds there is a vast barrack of a building called HMS Conway which, when it ceased being a naval training establishment, was used by Cheshire Education Authority for a drama summer camp. Here Anne spent a month, four summers running at the end of the 1970s, encouraging truculent teenagers to explore their creativity. She was responsible for getting the costumes made; the students blossomed, and she absolutely loved it. We peered through the laurel and HMS Conway looked handsome and deserted but just how she remembered it. Memories came flooding back, and she nostalgically identified the different departments, and her bedroom window!
I have a watercolour of the Menai Straits with 'Beaumarais, 1854' written on the back, and I wanted to find where it was painted. It shows Snowdon in the distance and the Thomas Telford (1826) Menai Suspension Bridge - a quiet and agricultural scene from the Beaumarais shore. The town is still charming, with its narrow streets, pretty coloured houses and quaint shops and cafes but the quay looks very different - teeming with cars and tourists queuing for boatrides. I couldn't imagine where the artist stood their easel.
In the north-west of the island Trearddur Bay was also teeming with holidaymakers – probably very different than when Anne's grandparents had a holiday house there. But we found the house, and her grandfather's grave.
Unlike most seaside resorts, which grew up out of a shipping or fishing port, Rhosneigr came to life because of tourism. It began around 1905 with Mr Palethorpes, a Yorkshire sausage baron, who built himself a huge white 'castle' on the beach, and many other holiday homes have been built since. We had tea with friends, Andrew and Joy, who have a lovely one (not castellated though!) and walked on the beach as the sun was going down.
Anne left from Bangor the next day and I drove to see the famous model village at Portmeirion, built by the architect Clough Williams-Ellis from 1925 - 1976. It rises up a slope with a dramatic sandy peninsular in front of it, and woodland behind and is a massive tourist attraction. 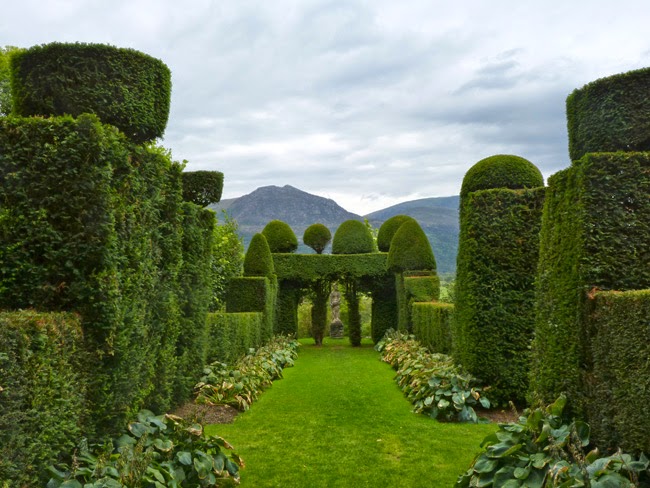 The best thing about Portmeirion for me was finding a flyer to Clough-Ellis's own garden, 5 miles away. It is called Plas Brondanw and the garden is stepped down in terraces from the house (which isn't open to the public) with farmland falling away below and, to the right, Snowdon rises up beyond gaps in the topiary (above). I thought it was magical and as I walked back past the house a small black rabbit scuttled out from under one hedge, looked at me for a moment, and then ran under another!

Posted by Geraldine Keith at 06:11