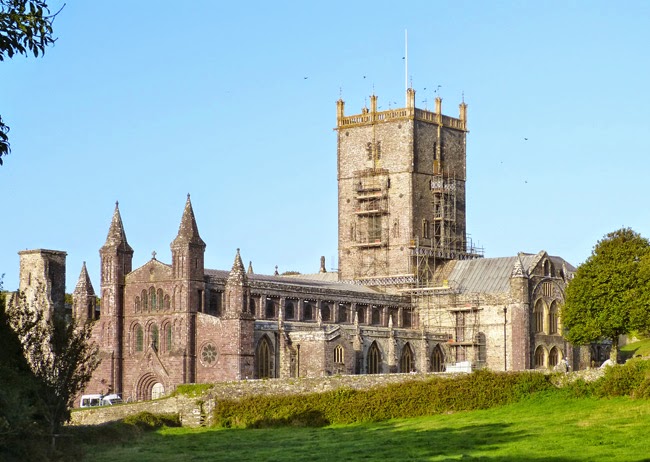 Anna joined me to visit St David's and we weren't quite so lucky with the weather. We had rung in advance to book a boat trip to see dolphins, seals and puffins on Ramsay Island (4.30pm) for an hour. This meant we could just make it to choral evensong at the Cathedral at 6.00pm; perhaps it was cutting it a bit fine. By the time we had made it to the quay at St Justinians the weather had started to blow up. We were put in three teams of eight, and issued with lifejackets, and still the three boats we were meant to be boarding hadn't got back from the previous trip. We looked like being late for church: never mind, if we were a few minutes late, we'd sneak in the back. But by 5pm when our boat was still not in and we were advised move to a safer part of the quay for boarding... we began to feel less and less inclined to go to Ramsay Island. Then the decision was made for us as the trip was cancelled, so we hurried back to Baa and headed for St David's Cathedral with time to spare. It is the most beautiful Mediaeval cathedral tucked into a dip between the town and the coast. There was a monastery on this site in 600ad founded by a monk called David who spread christianity in the region and attracted pilgrims from all over the world. Today the cathedral is largely Norman, quite small, and simple inside, with leaning arches and a pronounced slope to the floor in the nave.
It was a good thing that we weren't late, because evensong took place in the quire with the visiting choir from Solihull slightly outnumbering the congregation. They sounded wonderful, and was exciting to be near enough to hear individual voices, see their concentration, and their mismatched socks. The choirmaster had a fearsome way of eyeballing the younger members whose concentration wavered. There were two boys of about seven, one of whom had a very earnest mother who crouched beside him and encouraged him with great fervour.
We were booked into a campsite at Newgale, south of St David's, which we never found, and so ended up at another one which was on the side of a very windy hill, with a distant loo block and a cold tap, no shower. We had a good supper with the wind lashing around the hill and Anna, who is used to more comfortable accommodation than Baa, let alone sleeping at an angle, made no complaints!
The next day we went to Dale, a tiny and sweet little village opposite Milford Haven. At first the mist was so thick we couldn't see beyond the boats anchored in the bay, but by the time we'd had a cup of coffee it had started to lift and we could see the tankers and the gas terminals appearing through the fog – they really looked rather lovely! And by the afternoon the mist had gone and we walked along a section of the Pembrokeshire Coastal Path at Freshwater West, before heading for lovely Tenby.

Posted by Geraldine Keith at 05:05