The campsite I stayed in for the stormy night was close to Ainsdale, near Southport, and in the morning the warden told me there was a good train service into Liverpool from the village. I parked in a residential street and (£3.80 return for Seniors) set off for the city, half an hour away. I walked around the city centre and then down to the dock area where much of Liverpool's regeneration has taken place. The Eye – similar to London, but smaller – gave a good view of the city. At the Tate I saw an exhibition of the Dutch artist, Piet Mondrian. It was mainly neo-plasticism – his blue, red and yellow shapes, strong straight black lines – which is how he got from abstract (an abstract version of a known form) to total abstraction - from the purest state of the human mind. I loved them, and was glad I took the headset! 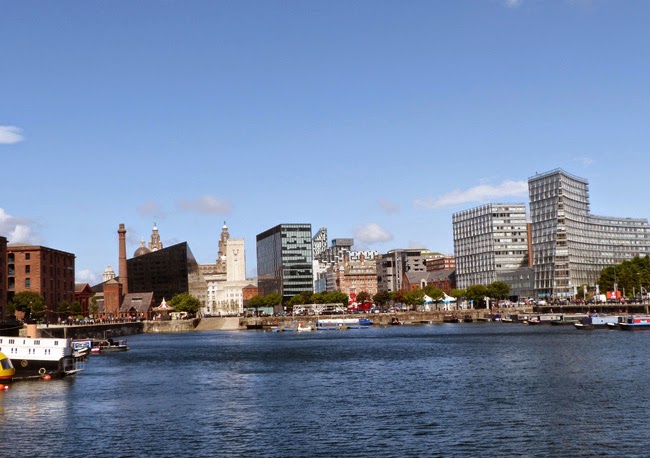 The docks are regular brick wharflike buildings, listed and wonderfully restored, and made into flats above the shops. The Liver Building (Royal Liver Assurance) was the tallest building in Europe when it was built in 1911, with its three iconic 'Liver' birds on the top. They're 18' high and are mythical birds. A local sculptor/artist was commissioned to make them and was told they should look like eagles. He'd never seen an eagle but had seen plenty of cormorants around the dock so he made huge cormorants, and then someone told him eagles didn't have webbed feet, so he took the legs off and added clawed feet.. .!!? Or that's what I was told by Chris, the wonderful Scouse guide on the Hop on Hop Off tour bus I joined by the Albert Dock. Those buses are so good and I only wish I had recorded what he said because he was so warm and funny and interesting.. He was very proud of his city and made it clear just how important Liverpool had been in the 19thC, with the White Star Line and Cunard, the dock crammed with people heading for America etc. It was, and still is, a buzzy place, and the most multi-cultural community. (Scouse comes from the Scandinavians... they brought with them a poor man's pie or stew with lots of vegetables and a bit of meat or fish. Delicious! Chris still has it once a week.)
The Anglican cathedral is wonderful and vast (the biggest in the UK) and was completed in 1978. At the other end of the road the Catholic Cathedral which was originally to have been designed by Edwin Lutyens (actually, back in time, there were other ideas too). 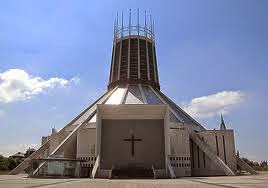 Lutyens' crypt was built but the project then stopped because of the war in 1941. What is there now was designed by Sir Frederick Gibberd and completed in 1967. It is rather wonderful (very un-Lutyens) with fantastic stained glass windows in the tower and the 'crown of thorns' coming out of the top. It's known locally as Paddy's Wigwam! 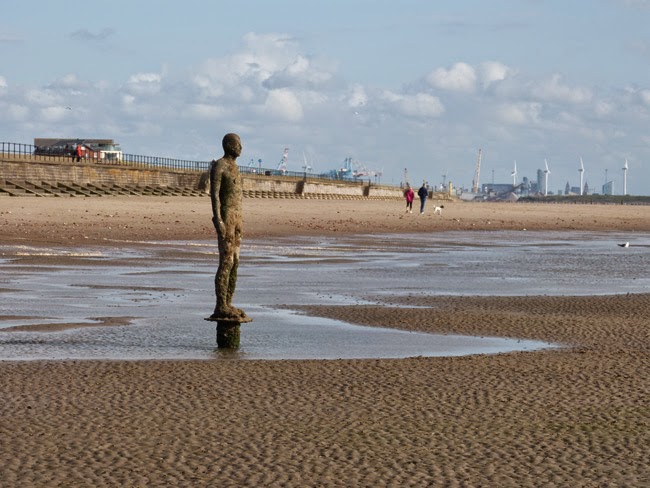 On the way back to Ainsdale I got off the train a few stops early (Hall Road, Northern Line) to walk down to Crosby Beach to see the Antony Gormley statues, Another Place. They are amazing! The tide was almost out and the statues, 100 identical cast iron figures weighing 650 kilos each, are staring calmly out to sea, (“human life tested against planetary time” Gormley said) -taking all that comes at them. They are spread out over 2 miles of the shore and that day the most battering wind was blowing off the sea. They have such an ordinariness about them and yet they are utterly extraordinary.
Posted by Geraldine Keith at 04:15