Alongside the sandy beach there's a mile of fun to drive through at Morecambe; amusement arcades, burger bars, and people sitting outside boarding houses drinking tea. I couldn't find anywhere to park and pulled over for a moment in a service road (admittedly on a double yellow line) and a traffic warden came running towards me like a charging bull. 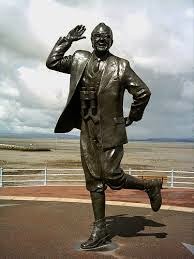 Half way along the pleasure mile Eric Morecambe's skipping statue looked dwarfed by the holidaymakers around him eating their icecreams and I felt a tinge of disappointment. So I didn't stop long, and now I wish I had because there is a wonderful art deco hotel, The Midland, close to Eric and I missed it!
A little further south is the village of Heysham where I walked round a small National Trust headland to see St Peter's Church and St Patrick's Chapel, both established in the 8th century. They sit on a beautiful promontory with Morecambe to the north and looking across, I think, to Grange. There are a set of graves cut into the sandstone which are thought to date from the 10thC with slots where the wooden crosses would have been, and they would have had lids. Water lay in the bottom of one or two graves, and a tourist lay in the biggest one, trying it for size! The chapel next door is even older, around 750AD. Walking round to the south Heysham Power Station comes as a stark contrast to the ancient hewn graves, and it is not so beautiful, or so golden, close up!
The weather took a turn for the worse as I drove on to Fleetwood. I didn't mean to stop long, but I wanted to at least see the harbour where its huge fishing fleet had once made this such an important Lancashire town. Today, the fishing industry in Fleetwood has almost disappeared.
The docks looked deserted (but it was quite late) as I drove round and got shouted at by a few gulls. But lots of new houses are being built near the harbour, so maybe things are looking up. Small factories, one after the other, line the route to the docks and I was glad to see where Fisherman's Friend throat lozenges (developed by a local pharmacist in 1865) are made. But there's little other evidence of fishing.
I passed the large North Euston Hotel, elegantly curved and sitting on a prime site overlooking the water – though it doesn't bear close scutiny – and decided to stop for the night on the promenade. I felt quite safe, under a street light, but it was pretty miserable, and one of the few occasions when I have asked myself what on earth I was doing! Alone on a Saturday night in the rain, cooking something with rice, outside an amusement arcade in Fleetwood. The glamour!
The next morning mizzly rain was falling when I lifted the blinds, and then Ange rang which was cheering. A man on a bike drew up outside on the wide pavement and looked in. He stayed there for at least 40 mins in the rain, wriggling unnervingly on his saddle with his hands in his pockets.. Ange and I talked for ages, and eventually he went.
Posted by Geraldine Keith at 03:47