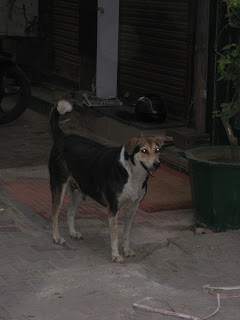 I suppose it isn’t surprising that if dogs resemble their owners they also reflect their surroundings. Dogs are everywhere in Delhi. Street dogs are wily scavangers but they must also get fed because they look surprisingly well. When I got up early last week to go to do the Old Delhi bicycle tour the street dogs in Shanti Niketan were all playing in the street at 6am. I wish I had got a photograph – they looked so fit and well and I thought I definitely detected a bygone strain of foxhound!  With a terrier head. By the time I returned in the afternoon they had all disappeared to snooze in shadows, or under cars, until the evening. Some street dogs are lucky and get adopted,  like the ones at the wonderful Lutyens Bungalow where I stayed before leaving for Jaipur which were strays from the nearby Lodi Gardens and are now living the good life.
Inside the leafy enclaves ‘owned’ dogs go walkies with their servants. Owning  a dog is a matter of status and most of them I have seen are too fat. Whereever there is a market, in a residential  area, with a grocery shop, a chemist, a taxi rank, there will also be a shop selling pet food. Pedigree dog food does very well here! In Shanti Niketan I saw two plump beagles parading around a residential square on shiny red leads looking very smug.
In the city centre dogs are on every street corner, leaner and grubbier, but certainly not lost. They cross the busiest roads and seem to know exactly where they are going. Some do look pretty terrible. In the heat of the day, if there’s a shrub big enough to offer shade, on the edge of a park or the central reservation of a multi-lane highway, there is likely to be a dog asleep underneath it. In Khan Market large, plump, dirty old dogs snooze in rows in the shade of the covered cut-throughs and look like old men waiting for the barber shop to open.
Posted by Geraldine Keith at 23:35

Thank you for your great work and… this Blog is a really pleasant surprise! Keep up the good work!