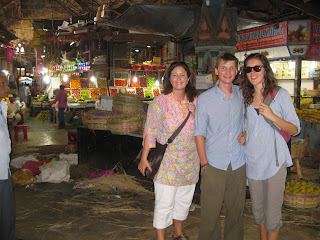 Nearly all marriages in India are ‘arranged’ to some degree. And most people, both young and older, say it is a system that works.We were talking about it today - Nicki, Rosie, Billy (pictured left) and me. We had been walking around Crawford Market and the Fabric Market, and ended up having lunch in a lovely little deli place behind The Taj Hotel.
Nicki went to the engagement breakfast party this morning of her personal trainer’s niece. She had to be there by 8am and it went on for quite a long time -  there were various ceremonies, parading of the couple,  future in-laws introduced formally, and a ring exchanging ceremony.The upshot of it is that after today the couple will be allowed to spend time alone, getting to know each other. They have only met a couple of times before and are getting married in October.  Nicki said she was a very pretty girl – 24 - and he was a bit older. It isn't like a 'child bride' situation any more, and couples don't meet for the first time on their wedding day - parents recognise that girls want an education and they want to work. But usually at 24 the girl will say she thinks it is time... and then the wheels begin to turn - spin. Shrieks of joy from the family and prospective husbands are sought –  age, background, prospects and horoscopes are all crucial.
We went on to The Taj Hotel and visited the jeweller in the shopping arcade who Nicki knows and discussed the subject of marriage with him. “What do you call it,” said Nicki “with modern arranged marriages, when there is some choice in the matter? It isn’t just a short list of one...” “It’s just an arranged marriage... like I had, 23 years ago,” he said, looking perplexed, with the warm smile of a happily married man.  “But of course they can say no.” Ah. They can say no, just not too many times. “My nephew had to say no,” said the jeweller, “ it was most unfortunate. “  Oh? We asked about the technicalities... “Well, she was just very..  heavy,” he said. “Others had turned her down too.” Oh, poor girl. “The trouble is they just get heavier,” he said, slim hipped with his silk tie and diamond ring. The pretty ones are ok - they can afford to be choosy.
Tonight I am staying at The Taj (and what a truly fabulous hotel it is, more of that another time) and, sad creature that I am, dined alone at the Lebanese restaurant, Souk. I had mixed mezzes first followed by something prawny. The waiter pointed at what looked like a piece of over-cooked asparagus sticking out of the pickles dish. “Mind that one,” he said, “very hot.” Thanks. You don’t want to be dining alone when you experiment with pickled green chillies.
There was a young couple on the next table. She was probably... 24? (maybe younger), very attractive,  confidant, wore western dress, and a big sparkler on her ring finger. She spent a lot of time texting. He looked quite unsophisticated, 7 or 8 years older than her and dead nervous, wriggling his feet around the chair legs. When she had finished texting she talked animatedly (in English), jabbing her finger to emphasise what she was saying, and he nodded a lot and spoke very little. She couldn’t finish her dinner and asked for a doggy bag. The waiter brought the bill and put it in front of her, and she passed it to her companion. They are getting to know each other, and I expect they’ll  make a  go of it.
Posted by Geraldine Keith at 19:43

Only recently found out from Nick what you're up to, and even more recently from Kim about your Blog...have really enjoyed reading about your journey so far...but mainly I just want to say bloody well done for doing it. Hats off to you for your courage...I'm sure you will be reaping the dividends for a long time.