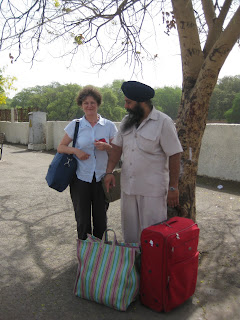 When you travel alone you have to get someone else to take the pictures. Here is one of me with Harvinder Singh Bindra, my taxi driver friend. He has driven me several times from guesthouse to market, and back and forth to where I have been based in Delhi - with friends in Shanti Niketan . One morning he took me on a tour of the major Delhi sites – the President’s House, etc.
With friends in Shanti Niketan, Harvinder Bindra says I am a well connected person. And  he is too – the contacts list on his mobile is brimming with people who he drives regularly - journalists and businessmen and people who work in the High Commission. We have great talks as he weaves his way through the Delhi traffic  in his beloved Ambassador taxi  (“You just sit there on my flying sofa!”), about India, Delhi, life and the stars – he is an enthusiastic student of astrology. Today, having driven me to Delhi Cantt station for the train to Jaipur, he was going to go home because it is too hot to work and he’ll go to the swimming pool. Later when it is cooler, he will go out again to work around Khan Market which is his patch. Venus had a hand in this planning too, but I couldn’t quite understand that part.
He kindly stayed with me on the station as we got there so early and he was worried how I would climb aboard with all my luggage as the train only stops for 2 minutes. Delhi Cantt is not the main New Delhi station but crowded commuter trains came and went, some had people sitting on the top (“Some trains are powered by diesel and some are electric,” HSB said, “those are the diesel ones – if they were electric those men would be dead.”). People dressed for work jump down from the platform, cross the line, and jump up the other side and one man was actually at work, picking litter  from the track into a huge sack which he will sell.
It is a very long platform and we set off in good time to be waiting where carriage G13 might stop, asking people along the way. He judged it perfectly (where the pic is taken) and now I am well on the way to Jaipur (a 4.5hr trip).  I am an A/C 3 tier passenger, so it’s air conditioned and I am the bottom bunk of 3.  My bunk was  occupied when I got on but with a few signs we sorted that and he moved to top bunk.  If the middle one was in use it would flap down from under the top one and I wouldn’t be able to sit up.
The Orient Express it is not, in fact it’s really dirty. But as I was incapable of finding my way round the website, and had to ask a friend to book my ticket and he put me down as 60 (! which I am not) I am travelling (with OAP  concession), the 293km journey for the princely sum of 4.50 (gbp, still haven’t found the pound sign). So can ’t complain! My prayer as I boarded the train that I wouldn’t need the loo has been answered.
Outside it looks incredibly hot! Parched white land, mostly cultivated, scrubby trees and a range of hills behind. We have passed through several villages and a couple of small towns and I have seen several buffalo and a camel. A constant stream of people come through selling food and water but I have refrained. My neighbour had breakfast which looked like two fish fingers but was pink inside with some chips. Now we have just been slowly through Bandikui Junction which had food stalls much more like the ones I imagine – but the train didn’t stop. ETA Jaipur 3.30pm.
(This post is now two days old,. I am now in Jodhpur.)
Posted by Geraldine Keith at 23:21