Old Delhi on a bike 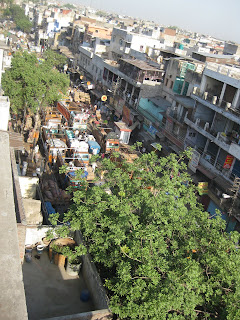 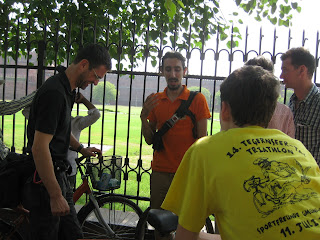 It's hard to believe - but true - after all my jitterings about the traffic in Delhi, that I should brave its perils on a bike this morning. A party of six of us met our guide, Thomas, at 6.30am before it was too hot and set off  around Old Delhi. Delhi By Cycle was started by a Dutchman (naturally!) though Thomas is American.This is a brilliant way of seeing the old part of the city (in fact the only way as the  lanes are so narrow) and, while we had our moments on the outskirts of the old part, crossing a few major intersections, most of the route was only tricky because it was so narrow and there were bullock-carts and motorbikes to negotiate. Overhead there is a mind-boggling web of electric wires and cables festooned from the sides of buildings and from poles. People add to the web, and extend it, and the sight of it would make your toes curl, but it seems to work.
(I realise I have not been clever with photos, next time I will attempt to crop pic before inserting, and get someone to take one of me so you know I was there.)
The Route picture (top) is a bit misleading because in fact most of the time the lanes are narrow and the buildings  high either side. Old havelis, once smart Mughal merchant houses with narrow fronts opening up with courtyards behind, are not so smart any more and home to lots of people and their small businesses - shoe repairs, sewing, etc. Everyone is really busy - pushing hand carts piled high with goodness knows what - one I peddled round was being pulled/pushed by about four men and had a 10ft stack of bolts of 'work wear', the stitching had burst on one of the bolts so I could see inside. It was impossible to stop and take photographs as we would have caused a monumental traffic jam - another one! And we looked touristy enough on our orange bikes.
We went through the meat market - lots of men rushing about with what looked like most of a cow on their backs but it can't have been, must have been a buffalo - and the flower market and the incredible spice market. Khari Baoli. Climbing up the dark stone stairs to look down (see above) we walked over a thin carpet of crunchy seeds and the smell of marsalas and chilli had us all gagging for air when we reached the top! There are walls either side except for the last narrow flight where the there was no rail on the inside, just a long drop. "Watch out," Thomas said, "it's along way down there. There used to be a handrail but it was a bit shaky and people leant on it and it was more scary - I think it's better this way." I think he's right. 'Health & safety' must numb the senses - there is absolutely none here. I'm sure wits are sharper here. On the way back down we saw the handrail lying on the floor - a wormy, splintered thing with a few severed spindles - someone must have leant too hard.
We stopped for a chai break, and then sped down Chandni Chowk, the main drag and the heart of Old Delhi, to the Red Fort (see pic, Thomas in orange). Then back into the narrow lanes to Karims (famous in Delhi, this branch would be hard to find without help) for a wonderful breakfast of rosti, dhal and slow-cooked goat.
We returned at 10am to where we started where the old fortress wall stands beside the Dallas-style mirrored Delhi Stock Exchange building. By now the place was heaving, more heaving, with traffic and people and livestock. A smartly-dressed traffic policeman waved his arm and blew a whistle but his efforts were futile. I felt so pleased to have done the tour, and quite relieved to hand the bike back all in one piece.
If in Delhi, I really recommend Delhi Bycycle - mine was called the Shah Jahan Tour and there are others.

Posted by Geraldine Keith at 00:15

Geraldine this is amazing! I have subscribed by email now and can't wait for the next installment. I hope you got all your computer problems sorted out, I will miss our lessons!xxxxx

Thinking of you so much and wishing I had the time to email or text longly but I just haven't. But know I think about you often often often and particularly when you begin work with the children.