From Jodhpur back to Jaipur

I am back in Jaipur after a fantastic 4 days which I will relate soon...
One of the things I am doing in India is finding hotels to go on The Hotel Guru website. I visited hotels and guesthouses in Delhi and in Jodhpur and, when I am here in June volunteering at the children’s home, I will also be looking for ‘the best places to stay’, at differing price brackets.
The train journey from Jodhpur was fine, a much better train than the one from Delhi, but I had top bunk this time and I couldn’t see out. These trains have 2-tier bunks going the length of the train on one side, and seating (bunks) going across like UK trains on the other side. As we got under way, though it was 9.30am, the lights went out, curtains were drawn, and the a/c was so effective we all had blankets. I felt cold! I read for a bit and dozed, but didn’t really sleep. Below, on the other side of the aisle, people of varying ages – a family - came and went through the curtain. To one side a plump foot with polished nails and an ankle bracelet stuck out - Mama. There was the most incredible noise – someone was snoring like a hog. I could see from my bunk that the girls were awake, playing on their mobiles and Dad had gone down the train...  it was Mama making the deafening noise!
I got down from my bunk in good time and got my case from under their seat and then was stuck in the aisle with it. “Please Mam,” one of the girls said, “come sit with us.” Soon father returned from further down the train. It is often incredibly difficult to understand what people say, as intonation is so different, but we chatted away. The father told me they were returning home to Agra and his elder daughter was a very good dancer. She liked folk and classical dance, not western. He prodded her.. ‘Dance! for this foreign Mam!’( I imagine that’s what he said. )She laughed and refused. I could understand –this was not a large stage on which to perform classical dance, between the two bunks with all of us in there.
So he prodded the younger one (they were 17 and 15) who was curled up under her blanket eating crisps.  After only a little hesitation she got up, set up her mobile phone to accompany her and danced – Bollywood/western music, and a Kylie routine – she was very good. We applauded and then came in to Jaipur and they helped me off the train with my case with a cheery wave.
I wasn’t sure quite where I was going to stay so I got the auto to bring me here to the Diggi Palace Hotel be. I knew I wanted to review this and place sometime...  and I could at least look round it and decide what to do.The auto driver was a lively character and kept trying to take me to other places, ‘just as good, cheaper’ but I said no I want to go to the Diggi Palace. We also looked for a Vodafone shop to sort out why my SMS isn’t working  but he was expecting me to walk across a 6-lane highway to reach Vodafone and I decided it could wait. 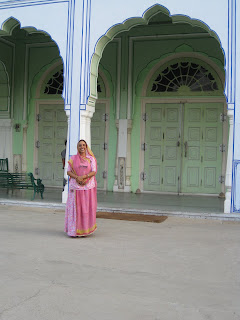 At first I thought it was just a nice haveli-style hotel on a large plot down the road from the Rambagh Palace, and a good central location. But I have spent almost two hours talking to Jyotika Singh Diggi, the wife of the Thakur (nobleman, landowner) who owns the place. It is their home and she is truly delightful.  The family would originally have lived on their property about 70km from Jaipur – they have villages and farms – but modern living meant they moved up here and started the hotel in 1990.
Indians are incredibly hospitable, and Jyotika (right, outside the durbar) has been talking to me about the Hindu way of life and their family – and showing me round the property. She’s been explaining about Brahmins and Kshatriyas, Vaishya and Sudras – that’s all the different levels of Hindu society.
They live behind the hotel and there is a huge durbar – where meetings are held with the Thakur - and there are cows and chickens, and stables for the ponies. All in the middle of Jaipur. Polo is huge in Rajasthan. Sadly the traffic has been so dreadful (what did I tell you?) that there have been some accidents on the way to the polo ground at the Rambagh Palace up the road, so all the ponies are stabled up there at the moment.
AND this is where they host the Jaipur Literary Festival in January which I have heard so much about – William Dalrymple, et al. More of that..
Posted by Geraldine Keith at 22:20